I am still bewildered by the fact that I have been in love with Cease Upon The Capitol for over a decade and I only heard DOLCIM for the first time last year. How in the hell did I miss this band? Luckily, when I started my distro I picked up the ‘Guillotine Ride’ cassette and was absolutely floored.

What does this sound like? Cease Upon The Capitol, obviously. The guitarist/vocalist from Cease Upon The Capitol created this band which, not surprisingly, sounds a lot like CUTC – throat-shredding screams, spacey post-hardcore riffing, lightning fast songs that still retain melody. It isn’t the same beast, but considering that the vocalist and guitarist is/was the same guy, there are definitely similarities and overlapping sounds. DOLCIM took what Cease Upon The Capitol perfected and dipped that fucker in acid. They sound like a corrosive, heavy and less melodic version of said previous band. I’m not going into a whole lot of detail here because I wasn’t aware of the band during their heyday and if you like Cease Upon The Capitol then you already have a pretty good grasp of their foundation and sound.

For those who have never heard about Cease Upon The Capitol, DOLCIM plays a very thick and suffocating brand of post-hardcore, screamo and maybe even thrash. The songs have bass all the way up to the meniscus. The drums will perforate your eardrums. The vocals will rip the cilia from inside your ears and the guitars jump between shredding, some lighter screamo moments and Cave In-style spaciness.

endamori played their first show in 9 months this past weekend.

they played with recreant on tour from tampa, altar of complaints, van hagar, and fragments of god. 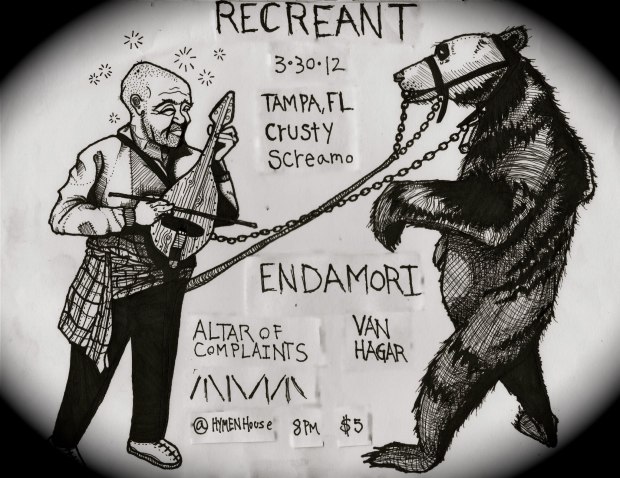